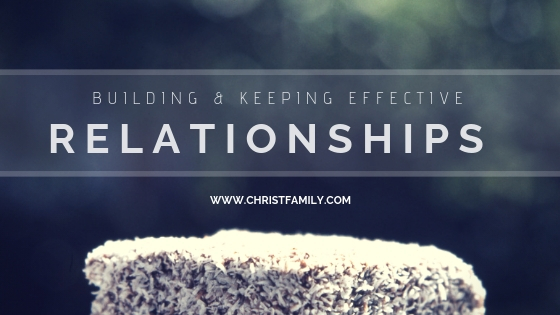 No man ever lives without having relationships with people. Even the most introverted people long to have meaningful relationships with those around them. There are indeed different levels of relationships and our understanding of the purpose of each type of relationship especially the role we have to play in it determines how much influence that relationship has on us. It also determines the level of influence it has on the lives of those we are related with. No man is an island. We are connected to each other and more so, we need each other to improve on our lives and make a lasting impact in our spheres of influence. It should, therefore, be very clear and settled that you need people, as well as people, need you. Note that there is a world God wants you to reach out to and that world is also trying to reach out to you. The quality of your relationships determines how much influence you can make on a needy world that surrounds you. More so, there is tremendous strength and effectiveness in partnerships born out of genuine relationships.

Before we go on, it is important you know that every genuine and successful relationship has love as its main foundation stone. If love is not in its right place, it is only a matter of time before things begin to fall apart.

Then one of them, which was a lawyer, asked him a question, tempting him, and saying,

Master, which is the great commandment in the law?

This is the first and great commandment.

And the second is like unto it, Thou shalt love thy neighbour as thyself.

On these two commandments hang all the law and the prophets

At salvation, our relationship with God is established but like every other purposeful and beneficial relationship, it requires process and growth. This means that after making the prayer that births you into the family of God, you ought to live in the consciousness of the fact that you were not born into a religious circle where you are simply called to observe certain routines demanded by a supreme being you do not see. NO! Being born again is about having an actual relationship with the living God and that relationship grows in levels of intimacy as you realize and walk in the light of this reality.

We are constantly called the children of God throughout the scripture. If we look closely at the life of Jesus, while He walked in the flesh as a man, we will see that he constantly lived and walked in close communion with the Father. To Him, God is Father, not just “LORD” to whom prayers and sacrifices are made. He spoke with the Father as He spoke with men, nay, more intimately than He interacted with men. Did Jesus think we should have the same relationship He had with the Father? Or does the Bible in any way support the idea and encourages us to? Well, let’s just consider a few verses that will throw more light on the matter.

In the book of John 20:17, the Lord Jesus said something remarkable to Mary Magdalene when He appeared to her after He rose from the dead.

Jesus said, “do not hold on to me, for I have not yet returned to the Father. GO instead to my brothers and tell them, ‘I am returning to my Father and your Father, to my God and your God”’

Praise God! Jesus wanted the disciples to know that God who is His Father and God is also their Father and God. Two more things I want you to notice there are; Jesus here calls the disciples brothers, why? Because they now shared the same Father. Secondly, take note that “Father” comes before “God” as He makes this proclamation. The world may know the LORD as God, but we know and relate with Him as Father. That is the relationship we have with Him.

I will be a Father to you, and you will be my sons and daughters, says the Lord Almighty

As far as our dealings with humans go, there are different types and levels of relationships. As we build these relationships, the purpose for which they are started is established and we can experience the benefits. One of such relationships we have with humans is friendship. A classic example of genuine friendship in the Bible is that between

And it came to pass, when he had made an end of speaking unto Saul, that the soul of Jonathan was knit with the soul of David, and Jonathan loved him as his own soul.

And Saul took him that day, and would let him go no more home to his father’s house.

Then Jonathan and David made a covenant, because he loved him as his own soul.

And Jonathan stripped himself of the robe that was upon him, and gave it to David, and his garments, even to his sword, and to his bow, and to his girdle.

These are two people who hitherto were not acquainted with each other. But as fate would have it, upon this occasion, they both became friends and the Bible records that their souls were knit together.  Also, take note of Jonathan’s love for David, demonstrated in their willingness to go as far as establishing a covenant. Finally, as we read further, we realize that Jonathan made a wonderful show of generosity born out of the love He had for David. He gave to David his robe, his garments, his bow and girdle.

A friend loves at all times and a brother is born for adversity.

These are evident demonstrations of the degree of friendship these two men were in from the very beginning. Though this relates to a physical or natural friendship, there is some spiritual significance here we must take note of.

At the time of the events we just read above, Jonathan was Royalty, the son of Israel’s King Saul. David had been anointed kind but that had not yet been materialized. Jonathan’s willingness to share with David items that were symbols of his royalty was not only a show of fidelity but a display of his desire to see David look like him and as such sharing in his royal status. In the same way, those of us who are Christians and have been born into royalty ought to share our royal status with the people we are acquainted with and bring them into royalty through the gospel of our Lord Jesus Christ.

And the rib, which the LORD God had taken from man, made he a woman, and brought her unto the man.

And Adam said, This is now bone of my bones, and flesh of my flesh: she shall be called Woman, because she was taken out of Man.

Therefore, shall a man leave his father and his mother, and shall cleave unto his wife: and they shall be one flesh.

There is definitely the marital dimension of relationships. A quick look into society today may make you think this form of relationship is more of a burden than a blessing. But before you conclude, remember that the very idea of marriage as a relationship was instituted by God Himself and before that HE clearly stated that it is not good for man to be alone.

Like every other relationship, marriage must have love as it’s very foundation. Not just romantic love but Divine love. The agape love of God is what keeps you together through the tough times and puts you over the challenges that come. Without the love of God, you may easily get married, but staying married will surely be a tough challenge.

God wants us to consider the relationship of marriage as that which exists between Christ and the church.

Husbands, love your wives, just as Christ loved the church and gave himself up for her.

It is a relationship purely built on love and devotion to each other. The husband is particularly instructed to love his wife and the wife to honour her Husband. That is part of the divine plan that keeps the relationship of marriage going successfully.

Case in point Elijah and Elisha

Yet I have left me seven thousand in Israel, all the knees which have not bowed unto Baal, and every mouth which hath not kissed him.

So he departed thence, and found Elisha the son of Shaphat, who was plowing with twelve yoke of oxen before him, and he with the twelfth: and Elijah passed by him, and cast his mantle upon him.

We can be sure that the relationship between Elijah and Elisha was that of a father and a son, not just a servant and master. For example, when Elijah was being taken to heaven in a chariot by a whirlwind, we hear Elisha crying out, calling him, my father, my father.

In this kind of relationship, the main purpose is to establish a younger person in the things of the spirit in a place of destiny.

The same type of relationship was established between David and Samuel. Like every other relationship, there are benefits and obligations on both part but it must all be woven together and built on the foundation of Love.

Then Samuel took the horn of oil, and anointed him in the midst of his brethren: and the Spirit of the LORD came upon David from that day forward. So Samuel rose up, and went to Ramah.

So David fled, and escaped, and came to Samuel to Ramah, and told him all that Saul had done to him. And he and Samuel went and dwelt in Naioth.

And it was told Saul, saying, Behold, David is at Naioth in Ramah.

And Saul sent messengers to take David: and when they saw the company of the prophets prophesying, and Samuel standing as appointed over them, the Spirit of God was upon the messengers of Saul, and they also prophesied.

It is not a very common or welcomed form of relationship in the church because there is actually little mention made of it in the New Testament. However, you will recall that the Apostle Paul on more than one occasion in the scriptures calls Timothy his son. Now Timothy was not a biological son to Apostle Paul, neither was he an adopted son. He was a spiritual son.

For this reason, I am sending to you Timothy, my son whom I love…

But you know that Timothy has proved himself, because as a son with his father he has served with me in the work of the gospel.

To Timothy my true son in the faith…

More so, we have Apostle Paul tell the church at Corinth that Even though they had ten thousand instructors in Christ, they did not have many fathers, for in Christ Jesus He had become their father through the Gospel [1Cor 4:15].

We ought to have spiritual relationships that help keep Christians on track while they are being built up spiritually.

Conclusively, no matter what form of relationship you get into, you must remember that the guiding rule is love and that God is love.  There are of course other types of relationships.  You can draw foundational principles that guide you in having effective and fulfilling relationships from those discussed here.